I have been playing with pdb for debugging code (introductory level)

Well, this is time to talk about something I have been playing, the pdb standard module python provides. I'll talk in the context of py 3.7+ since there are differences that improve how to work with this.

Well, first of all, as you should found in this field and coding experiences and challenges. You have to deal with bugs, unexpected errors, or even worst, unexpected behavior which sometimes is most difficult to trace.

Here are some lights on how to use it, this is really useful if your life is coding :). Consider the following commands table.

Having seen the table above, then let's play a bit. See the following example: 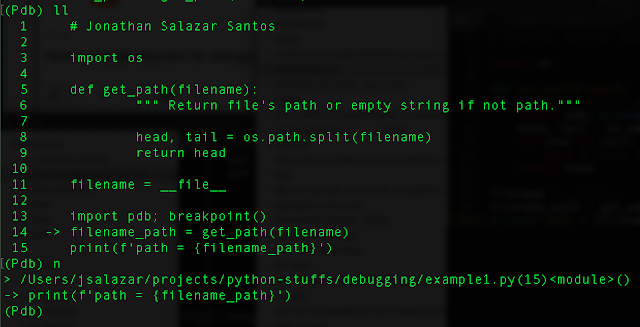 I entered ll command (see on the table it meaning), as you can realize it, it shows all the context of line 14, remember this command shows more lines to better understand the context of the code, also you always see the -> that shows you where you are. After that first command entered, I ran n which continues to the next line (15).
You could always check values on any variable while you are walking throughout your code, use the command p and the variable name as follow:

Finally, use q to exit pdb module.
Next post, we'll talk and play with breakpoint functionality.

How to delete one or more documents from your MongoDB repository